After a long hiatus, it's time for a running update!

So the last few months have been focused on recovery and building my mileage back up. I did a couple of shorter races and also ran/walked the Cowtown Half Marathon with a friend who was doing her first. Meanwhile, I still had the Dallas Rock 'n' Roll Half Marathon on my mind. I had signed up to run (my fourth time!) very early so that I could get the best price. I had a PR in mind when I signed up, but this was before the IT band issue came up. Even though my IT band was doing better, it still didn't feel completely healed. I also felt like I was generally much slower than before my injury. I knew I could finish the distance, but I felt discouraged about how my performance would go.

Luckily, my race ended up going better much better than I expected!

Michael had originally signed up to run as well, but after his training got derailed, he decided not to. Which meant that he was my chauffeur and cheerleader for the day! He dropped me off as close to the starting line as he could get, which was nice. I didn't have to walk far at all and immediately made my way to Corral 5. The weather had been warm in the days leading up to the race, but the temperature had dropped a little bit. I think the high for the day was predicted to be in the low 50's and it was in the 40's when we started, plus there was a chance of rain in the forecast. I wore shorts, a short-sleeved tech shirt and a long-sleeve half-zip tech shirt. I also wore a hat (in case of rain) and decided to wear my IT band compression wrap. I bought the compression band a couple of months ago (before physical therapy), hoping it would help with the IT band pain and while I don't think it's a cure, I do think it has helped keep the IT band from becoming more inflamed. In any case, I figured it wouldn't hurt to wear it.

My corral started only about 5 minutes after the gun time and off we went! Immediately, I was feeling good but tried to keep myself from going out too fast. I settled into what felt like an easy pace. I was surprised when my watch beeped at the first mile and saw that I had run that mile at a 9:32 pace. I didn't feel like I was going that fast and certainly didn't think I was running faster than about a 10:00/mile. So I made a mental note to keep it easy, but each mile ticked off a little faster.

We ran through downtown, then uptown and into Highland Park. The first several miles were a gradual uphill. I stopped at most of the water stations to get fluid. I didn't feel thirsty (especially since the temperatures were cooler) but wanted to make sure I was staying hydrated. I mostly just drank water, but I did get Gatorade at a couple of the stations. I also took a couple of Honey Stinger chews every 3-4 miles (with water).

I knew that my parents and Michael's mom would be around the 6.5 mile marker, so I looked forward to seeing them. I kept telling myself that once I saw them, I would slow back down. Around the 6-mile mark, the 2:00 pace group caught up to me and I realized that the DRC training director (Vishal) was the pacer! I asked him what corral they had started in (they started in 7, I had started in 5) and chatted with him for a minute. I debated trying to stay with the pace group, but knew that trying to run a sub-2:00 half marathon would be really pushing it! Instead I let them pass me after a while and looked forward to seeing my family.

Sure enough, they were in the same spot they have been for the last 2 years! Although this year they didn't get good pictures, my dad only managed to get one after I had passed them. 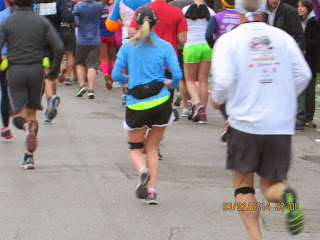 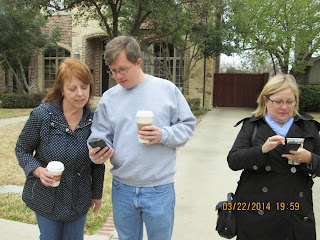 (I have a GPS app on my phone that allowed Michael to track me, he was showing his mom that I should be coming soon.)

After the halfway point, I kept expecting my IT band to start hurting, which would slow me down. Surprisingly, I continued to feel good! We crossed 75 Central Expressway and passed the Run On! store on Mockingbird, which had a huge crowd out to cheer! Right after I passed Run On! (about mile 8), I stopped to stretch. My IT band was feeling tight, but not painful, and a good stretch helped loosen it up. Once we turned onto Skillman, the rest of the race was a gradual downhill. I continued to feel good and even managed to pick up my pace slightly after the 10 mile mark. I stopped once more in mile 12 to stretch again, then we were in the home stretch!

I had planned on really pushing my pace once we got into Fair Park, however my stomach suddenly started to feel upset. It wasn't bad enough that I thought I needed to stop, but I was a little afraid to try to run any faster. We made several turns coming into Fair Park and this time I knew that there was a photo op before the real finish line. (Last year, I thought the photo op was the finish line at first!) I also saw Michael, he had managed to make it to the finish line just in time to see me! I crossed the finish line still feeling a little queasy but luckily as soon as I stopped running I felt better. I looked at my watch and saw 2:05 and some change, which I was very happy about!

I grabbed some water, Gatorade, a bag of pretzels and a couple of Power Bar protein bars on my way through the finisher's chute. I found Michael pretty quickly and we headed out! 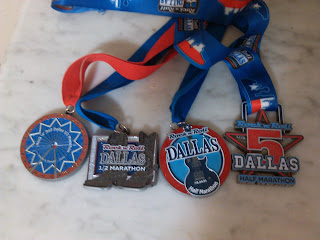 One more medal in my Rock 'n' Roll collection! This was the fifth year that Rock 'n' Roll has put on a race in Dallas, hence the big 5. I noticed several runners that had special "Veteran" bibs indicating they had run the race all 5 years. Pretty cool! (I didn't run the race in 2010, the first year it was in Dallas.)

Another great Rock 'n' Roll race in the books! My official time was 2:05:15, which is not my best time but far from my worst! It was a big confidence-booster for me after my injury recovery, so I call that a win.

And the Mountains Echoed
by Khaled Hosseini